How to play poker

Home / How to play poker 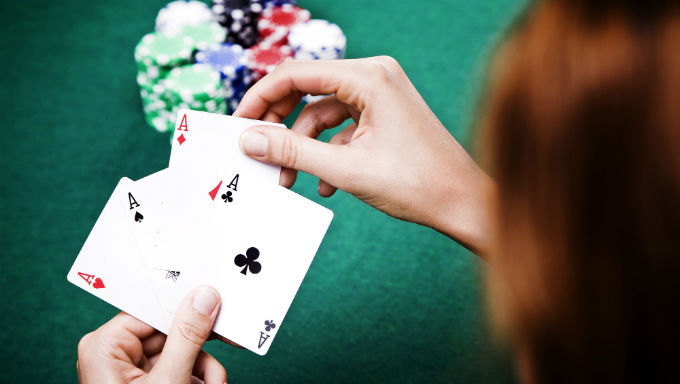 How to play poker

How to play Poker

Looking to brush up and/or learn how to play poker? This “How to Play Poker” guide will help you learn all the basic rules of poker.

In hold’em, players receive two down cards as their personal hand (holecards), after which there is a round of betting.

Three board cards are turned simultaneously (called the flop) and another round of betting occurs.

The next two board cards are turned one at a time, with a round of betting after each card. The board cards are community cards, and a player can use any five-card combination from among the board and personal cards.

A player can even use all of the board cards and no personal cards to form a hand (“play the board”).

A dealer button is used. The usual structure is to use two blinds, but it is possible to play the game with one blind, multiple blinds, an ante, or combination of blinds plus an ante.

The Turn
Flop
The Turn
The River

These rules deal only with irregularities. See Button and Blind use for rules on that subject.

Omaha is similar to hold’em in using a three-card flop on the board, a fourth board card, and then a fifth board card. Each player is dealt four hole cards (instead of two) at the start. To make a hand, a player must use precisely two hole cards with three board cards. The betting is the same as in hold’em. At the showdown, the entire four-card hand should be shown to receive the pot.

Seven-card stud is played with two downcards and one upcard dealt before the first betting round, followed by three more upcards (with a betting round after each card) and one more downcard. After the last downcard is dealt, there is a final round of betting. The best five-card poker hand wins the pot. In all fixed-limit games, the smaller bet is wagered on the first two betting rounds, and the larger bet is wagered after the betting rounds on the fifth, sixth, and seventh cards. If there is an open pair on the fourth card, any player has the option of making the smaller or larger bet. Deliberately changing the order of your upcards in a stud game is improper because it unfairly misleads the other players.

OBJECT: The best five-card poker hand, out of seven cards, wins the pot.

Players can use any five of their seven cards to make their best hand.

The best five-card poker hand, out of seven cards, wins the pot.

Half-pot, pot-limit and no-limit betting. In big-bet (that is, non-limit) games, all forms of stud require an ante from each player, with the highest card or hand acting first in all rounds of play. In the first round, the high card must either bet or fold. In later rounds, the high hand can either bet or check. The initial bet size is at the discretion of the opener and can usually be as small as one ante, or up to the maximum bet size allowed in the form used, that is, half the total antes in half-pot, the total antes in full-pot and as much as you wish in no-limit.

There is an ante, a compulsory bring-in from the low card, and bets typically double for the last two rounds, though this can be varied according to player’s tastes. The bets are usually capped at three per round, except in head-to-head pots.

Seven-card stud high-low split is a stud game that is played both high and low. A qualifier of 8-or-better for low applies to all high-low split games, unless a specific posting to the contrary is displayed. The low card initiates the action on the first round, with an ace counting as a high card for this purpose. On subsequent rounds, the high hand initiates the action. If the high hand is tied, the first player clockwise from the dealer acts first. Fixed-limit games use the lower limit on third and fourth street and the upper limit on subsequent betting rounds, and an open pair does not affect the limit. Aces can be used for high or low. Straights and flushes do not affect the low value of a hand. A player can use any five cards to make the best high hand, and the same or any other grouping of five cards to make the best low hand.

The lowest hand wins the pot. The format is similar to seven-card stud high, except the high card (aces are low) is required to make the forced bet on the first round, and the low hand acts first on all subsequent rounds. Straights and flushes have no ranking, so the best possible hand is 5-4-3-2-A (a wheel). An open pair does not affect the betting limit.

Lowball is draw poker with the lowest hand winning the pot. Each player is dealt five cards face down, after which there is a betting round. Players are required to open with a bet or fold. The players who remain in the pot after the first betting round now have an option to improve their hands by replacing cards in their hands with new ones. This is the draw. The game is normally played with one or more blinds, sometimes with an ante added. Some betting structures allow the big blind to be called; other structures require the minimum open to be double the big blind. In limit poker, the usual structure has the limit double after the draw (Northern California is an exception.) The most popular forms of lowball are ace-to-five lowball (also known as California lowball), and deuce-to-seven lowball (also known as Kansas City lowball). Ace-to-five lowball gets its name because the best hand at that form is 5-4-3-2-A. Deuce-to-seven lowball gets its name because the best hand at that form is 7-5-4-3-2 (not of the same suit). For a further description of the forms of lowball, see the individual section for each game. All rules governing kill pots are listed in Kill Pots.

In ace-to-five lowball, the best hand is any 5-4-3-2-A. Straights and flushes do not count against a hand.

In deuce-to-seven lowball (sometimes known as Kansas City lowball), in most respects, the worst conventional poker hand wins. Straights and flushes count against a player, crippling the value of a hand. The ace is used only as a high card. Therefore, the best hand is 7-5-4-3-2, not all of the same suit. The hand 5-4-3-2-A is not considered to be a straight, but an A-5 high, so it beats other ace-high hands and pairs, but loses to king-high. A pair of aces is the highest pair, so it loses to any other pair. The rules for deuce-to-seven lowball are the same as those for ace-to-five lowball, except for the following differences:

There are two betting rounds, one before the draw and one after the draw. The game is played with a button and an ante. Players in turn can check, open for the minimum, or open with a raise. After the first betting round, players have the opportunity to draw new cards to replace the ones they discard. Action after the draw starts with the opener, or next player proceeding clockwise if the opener has folded. The betting limit after the draw is twice the amount of the betting limit before the draw. Some draw high games allow a player to open with any holding; others require the opener to have a pair of jacks or better.

There are two betting rounds, one before the draw and one after the draw. The game is played with a button and an ante. Players in turn can check, open for the minimum, or open with a raise. After the first betting round the players have the opportunity to draw new cards to replace the ones they discard. Action after the draw starts with the opener, or next player proceeding clockwise if the opener has folded. The betting limit after the draw is twice the amount of the betting limit before the draw.

Rules of Draw Jacks or Better

There are two betting rounds, one before the draw and one after the draw. The game is played with a button and an ante. Players in turn can check, open for the minimum, or open with a raise. After the first betting round the players have the opportunity to draw new cards to replace the ones they discard. Action after the draw starts with the opener, or next player proceeding clockwise if the opener has folded. The betting limit after the draw is twice the amount of the betting limit before the draw.

Rules of Draw Jacks or Better

The rules above are from “Robert Rules of Poker” which is authored by Robert Ciaffone, better known in the poker world as Bob Ciaffone, a leading authority on cardroom rules. 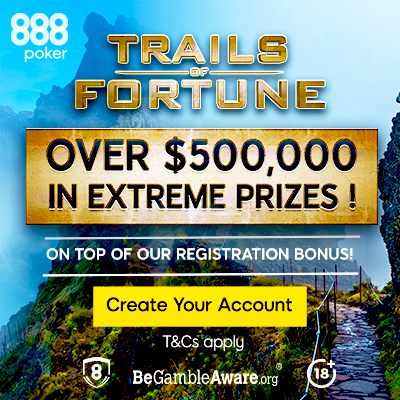 Our #TrailsOfFortune and #BLAST have teamed up for a surprise #Freeroll today 8 Jul 2020!

Watch this clip to check out #Team888's @DominikNitsche's crazy final table madness in a fast food joint, of all places! 🤔😆😂